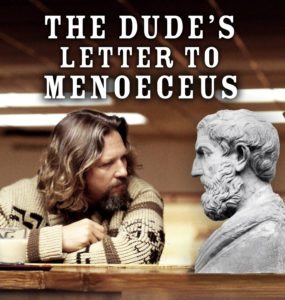 As many of you know, Dudeism is inspired by a lot of ancient philosophy. Probably the two most influential have been Epicureanism and Taoism. We’ve gone into great depths discussing Dudeism’s relationship to Taoism, but not so much in regards to Epicureanism. That’s partially because the writings of Epicurus have been mostly lost to history. However, a few pieces have abided. One in particular, Epicurus’ Letter to Menoeceus, lends itself to a Dudeist interpretation. And so here it is!

The Dude’s Letter To Menoeceus

So, I’ve been keeping my mind limber and some new shit has come to light, man: I figure that wisdom is like learning how to bowl. Bear with me here. This shit is far out.

First off, it’s always a good time to bowl. Don’t be afraid to take off the bumpers when you’re young, or, to start learning when you’re old. Bowling’s just about having fun. It’s not about scoring trophies.

Everyone should learn to bowl, man. When you grow old, you’ll look back and know that you really rolled. And when you’re young, you know that someday you’re really going to fit right in there. Don’t listen to anyone who says, you know, “you’ll never get good”, or, like, “what’s the point?” or “the balls won’t fit your fingers.” Fuckin ‘A! That’s bullshit, man, because there are hundreds of balls in just about every size. Anyway, even if you can’t throw a strike, as long as you’re having fun, you’re getting better—you’re getting wise. So learn to enjoy life in the lanes, because once the tournament is over, you don’t get to go back and play again. You know, it’s like Lennon said: “Imagine there’s no heaven.” J.W. Lennon. John Winston Lennon!

Now, if you really want to live the good life, man, all you have to do is learn to abide. First of all, you should take comfort knowing that Dudeness abides. It’s out there taking ‘er easy for all us sinners. I’m talking about the universe here. The entire cosmos lets its massive balls swing in the intergalactic breeze, man. The universe doesn’t want to keep you down like the Man and his goons. It’s not like some fucking nihilist pissing on your rug and dropping marmots into your bath while you’re burning a jay. Not even close, man. Nobody knows if there is a God or not. But if there is one, he definitely listens to Creedence.

Indeed, man, there are some really, you know, interesting superstitions out there. But if there really is a Big LeGodski, he sure as shit isn’t sitting on a cloud, throwing lightning bolts, or tossing people down volcanoes. The big Dude in the sky wouldn’t sacrifice little Lebowskis or kill pacifists for stepping over the line a little.

Let’s be consistent here, man. Happiness isn’t just some fucking advertisement that passes you on the side of a bus, man – it’s seeing through all the bullshit. Like we did as kids! Of course, some of us eat up all the superstitions. And because of that, the Man gets to tell us that we’re not supposed to be happy yet, or, that we have to wait to be happy some time later. Well, you know, that’s, just, like, just their opinion, man. It’s like Cicero said: “Cui bono.” You know? “Look for the person who would benefit from this shit.” It’s all a scam, man! What’s the fuckin’ point? It’s just a game!

And we each have our own game to play. The Dude doesn’t care what game someone else is into. The Dude only cares about the game that the Dude cares about. People assume that their gods are as judgmental and greedy as they are. But when your thinking isn’t so uptight, you can see that the priorities of the universe just aren’t compatible with the priorities of the Man. The whole cosmos is a lot more complex, you know?

One of the biggest things people get hung up on is death. But you know what, man? There’s no reason to fear the reaper. No one goes to their own funeral, right? Remember, the reaper’s always out of sight, so there’s a good reason to keep him out of mind. You can’t live forever, so don’t waste your life trying.

Look, man, some people are fragile, very fragile. They think that death is like, either a bad acid trip, or maybe a peaceful sleep. Fuck that! That doesn’t make any sense. You can’t be and be dead at the same time, man. You can’t be anything if don’t exist. Think about that, man. Far fucking out!

The good life can’t be all about death, or avoiding death. The good life is about listening to a good album, or sliding into a warm tub. You know what I mean? Get it while it’s hot! Don’t just sit around waiting for leftovers. And also, don’t be so uptight, you know, taking things personally, sweating the small stuff. Your life’s not a race, man. You don’t get a medal for finishing first. Enjoy it while it lasts. If you look at life this way, you’ll learn to live well. And you’ll learn to die well, as well.

All this goes for everyone, man, old folks and kids alike, because, you know, everyone’s welcome at the alley, and it’s always open. Only a goddamn moron would tell a kid to give up, or to tell an old man it’s too fucking late.

Equally moronic are the nihilists who say: “Fuck this. Bowling sucks. I wish I weren’t even born.” If they really believe that life isn’t worth living, then why don’t they just kill themselves? But they won’t, man, because nihilism is just a pose. It’s not a real philosophy.

There are lots of facets to this, man, lots of ins and outs. For one, consider this – you don’t own the future. But at the same time, the future doesn’t own you. So don’t set up false expectations or get your hopes up too much. But also, man, don’t just give up entirely and surrender your balls just because you throw a gutter from time to time.

There are some things that you’ve got to have in life. It’s like the difference between the main dish and the toppings. You need to tell the difference between the two if you want to find your path. If you can differentiate between what you need and what you want, you’ll stay healthy throughout the games regardless of how many points you rack up. And that’s the point, man – being healthy feels good. When you make wholesome choices (in the parlance of our times), you’ll be more likely to be happy.

You feel good when you get what you need. And that’s what it’s all about, man. It’s how we make choices. It’s how we spend our day. Feelings are how you make sense of all this shit. It’s like Obi-Wan Kenobi said: “Trust your feelings, man, you know them to be true.”

You mostly want things that feel good because they satisfy your needs. When you make bad choices, you feel like shit and get sick. Now, that being said, man, sometimes shitty things turn out better than you’d think. So, later on, it turns out that they weren’t so bad after all. So, given the nature of all that shit, it’s pretty clear that it’s not just all black versus white, you know? Some things suck, but turn out all right, while some run smoothly and then turn into fucking disasters.

So, like, for example, music is awesome, right? But I hate the fucking Eagles, man. So depending on your perspective, music isn’t always good. The only thing that’s always good is to feel good. For instance, when you’re having a bad trip, just take it easy, man. You can still get yourself to feel good by takin’ it easy, and then working your way back home.

The same thing goes for your checking account. You’ve got to feed the monkey. But you don’t want to be so desperate you’re blowing strangers for cash. Also, if you’re lucky enough to be loaded you shouldn’t wear your money on your sleeve and make yourself a target. Don’t let yourself get kidnapped! Know what you really need, and you’ll be able to survive it all, even if you go broke.

When I say that feeling good is what’s really good, I don’t mean, you know, becoming a cash machine. Life isn’t about getting bumped up into a higher tax bracket. What’s really good is taking it easy. When you learn to take it easy, you develop the wisdom to see life for what it really is. But hey, you’ve got to be careful! If you’re not honest with yourself, you’ll never be able to see life for what it truly is, and you’ll never be able to be happy. That’s because without wisdom you can’t actually know what it is that makes you happy.

Once you figure all this out, it will really tie everything together. When you realize that happiness is your choice, there can be no reason to get bummed, since, as the fella said, “The only thing we have to fear, man, is fear itself.” Right? Lady Luck favors no one, contrary to, you know, popular opinion in Vegas. There’s no reason for her to piss on your rug. She’s got her own shit to deal with. What matters is how you handle everything when your rug gets pissed on. In the same way, when it comes to bowling, it’s better to calmly lose a fair game than to win by cheating. “Calmer than you are!” as my friend Walter might say. Just as the Dude abides, so does calm always prevail in the end.

So anyway, if you keep your mind limber and meditate on this stuff, you’re bound to bring universal Dudeness into your life. There is an inexhaustible tournament in the heavenly alleys of wisdom, yet it’s only once you learn how to play that you can relax and really take ‘er easy. And it’s only then that you can begin to truly enjoy the game.

I hope you make it to the finals!

Nathan Bartman is an author, poet, and musician, who publishes his music under the name SHAZDAR, and writes philosophical reflections through the Society of Friends of Epicurus [http://societyofepicurus.com]. Recent contributions include On -Isms and Pleasure Wisdom, an essay concerning the overuse of linguistic generalizations in discussing science, philosophy, and religion [http://societyofepicurus.com/on-isms-and-pleasure-wisdo/]. Other recent works include the “Lady in Black: Original Motion Picture Soundtrack”, a neo-Noir short to be released in select theaters this Fall, written and directed by Cory Boughton. Find more of Nathan’s music here.

Oliver Benjamin is the founder of The Church of the Latter-Day Dude (Dudeism).