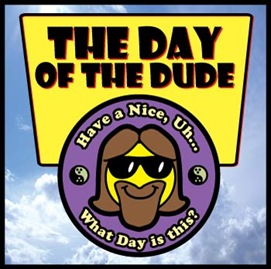 The Day of the Dude takes place on March 6

Happy Dude Year
January 1
This of course is the day when we recognize that even though the year has changed, everything is always changing. So don’t get hung up on arbitrary dates. Instead of making a new year’s resolution, make a Dude year resolution not to worry so much about what you should do, and just dude it, instead.

Pal-o-mine’s Day
February 13
Valentine’s day can put a lot of pressure on couples and be a real drag for those who are single. Instead of celebrating romantic love, the Dudeist Pal-o-mine’s day celebrates pals, friendships and good buddies. Occurs one day before Valentine’s Day so that those who are in romantic relationships can celebrate it as well.

Hangover
February 27-March 6th
The week-ish long celebration beginning Feb 27th with National Kahlua Day and culminating on the Day of the Dude, March 6th. This is a sort of Dudeist Lent, where we kick back and appreciate the simple pleasures of life instead of chasing after the more complicated and painful ones.

The Day of the Dude
March 6
This is the day when our founding text, The Big Lebowski was released in the theaters. It’s also a day of great easy taking as we strive to do as little as possible. It’s our main holiday, so don’t be sacrilegious and work too hard at it.

Take it Easyster
Same date as Christian Easter
Whereas the Christians celebrate the resurrection of Christ on this date, Dudeists celebrate the relaxation of uptights. By acknowledging that spring always follows winter, we remind ourselves that we can’t be worried about that shit. Life goes on, man. In keeping with the fertility-ritual traditions of Eostre (the pagan tradition upon which Easter may have actually based) this can be a good time to make prayers at the shrine of Our Special Lady.

April Dude’s Day
April 1
As Great Dude in History, Mark Twain put it “This is the day upon which we are reminded of what we are on the other three hundred and sixty-four.” On this day we celebrate the foolishness of the human race, and also the sense of humor that allows us to abide that foolishness.

Limber Day
April 20
Known the world over as a day to celebrate getting high, we put our own twist on the joint.

Passitover
Same dates as the Jewish Passover
Jews celebrate Passover to commemorate their deliverance from slavery and bondage. Dudeists do the same, celebrating and encouraging our freedoms to flourish. However, instead of a diet of unleavened bread, Dudeists are eligible to opt for a diet of unleavened beer instead.

Summer Shabbos!
June 20
On the night before the Summer Slowstice we honor the end of the first half of the solar year. This is the Dudeish night of rest.  Try not to operate any heavy machinery. Also happens to be John Goodman’s birthday.

The Summer Slowstice
June 21 (in the northern hemisphere)
On this day we observe the longest, slowest day of the year. Try to perform everything at half speed.

Indudependence Day
July 4
While Americans observe this day to celebrate their victory over their British overlords, Dudeists use this holiday to affirm their psychological independence from any powers-that-be. Slavishly following any cause, flag or ideology (including that of Dudeism) is dangerous and hampers personal growth. Our indudependence brings us together.

Cush Hosanna, a.k.a. Kush Hosanna
Same date as the Jewish Rosh HaShana
In Jewish tradition, Rosh HaShana is the beginning of the new year (Rosh=”head” and HaShana=”the year”). Dudeism totally misinterprets this. For us, cush=”comfort” and hosanna=”help” (in Hebrew). This also commemorates the time in early September 2021 when Jeff Bridges announced his cancer was in remission. We look at Cush Hosanna as a time to relax and be healthy and find cosiness in our lives. Those who smoke marijuana refer to the holiday as Kush Hosanna, as Kush is another word for cannabis.

Melloween
October 31
Although many Dudeists use this day to dress up like the Dude or other Lebowski characters, Melloween harkens back to the original meaning of Halloween (originally “hallowed evening”). Descending from a Gaelic festival called Samhain, this was the time of year when one would pay homage to the dearly departed. On Melloween, Dudeists are prone to remember friends and family who have passed and raise a glass to them in honor and affection. We can also take the time to reconnect with living family and friends with whom we’ve fallen out of touch.

Thankiesgiving
Same date as US or Canadian Thanksgiving
Here we say “thankie” to all the wonderful things we have to be grateful about. And to all of those who have helped us.

Mauder’s Day
December 3
Our Mauder is a figurehead for the nurturing, creative spirit in all of us. Maude helps perpetuate the whole durn human comedy and makes sure there’s a Little Lebowski on the way in all of us. It’s also Julianne Moore’s birthday! Together with The Slackernalia and Kerabotsmas, this forms an end of the year trifecta of Dudeist celebration, and the birthdays of three of The Big Lebowski‘s main characters.

Kerabotsmas
December 13
The more somber Dudeist winter holiday, in honor of Theodore Donald (Donny) Kerabatsos, when we remember those who died for us sinners, and remember those who we loved so well. Not uncoincidentally, this also happens to be Steve Buscemi’s birthday.

The Winter Slowstice
December 21 (in the northern hemisphere)
On this day we acknowledge the darkest, coldest day of the year. Good for a bit of hibernation!

Dudeistmas
December 25
While other people might be celebrating Christmas, some Dudeists prefer to celebrate Dudeistmas, which is a much easier version of the holiday. Forget about all the pressures associated with gift-giving and making elaborate dinners. Just have some pals over and order in! You might want to burn some herbs to help invoke the spirit of the Dude, but that’s up to you.

St. Marty’s Day
The 9th day of every month
In honor of the late actor Jack Kehler. He played Marty the landlord, uttering famous phrase “Uh, Dude, uh, tomorrow’s already the tenth” to remind the Dude to pay his rent. Dudeists now acknowledge St. Marty’s day every 9th day of each month. We take this opportunity to reflect upon friendship and support of one another. Marty supported the Dude by not being a hardass about the rent and the Dude supported Marty’s artistic pursuits by showing up to watch his performance.

Did we forget any? Got some Dudeist holidays to suggest? Contact us at dudeism.com/contact and let us know!

----
~ Listen to our original album of Lebowski songs ~