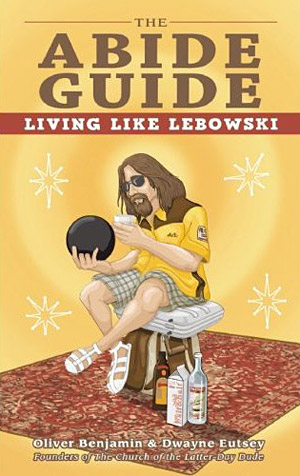 Duderinos Unanimous is taken from our book The Abide Guide. More info here.

A 12-Step Program for Personal Dudevolution

We’re not sure why personal improvement programs always require 12 steps. Nevertheless, Alcoholics Anonymous pioneered the idea of the 12-step program and our version is inspired by theirs. Our goal is similar to theirs, but instead of trying to overcome alcohol or narcotic addiction, the Duderinos Unanimous program is much more general, designed to help us be more “Dude” from day to day.

1. Admit that the whole world has gone crazy. We may be powerless over it. But we can take care of our own private residence.

“A journey of a thousand miles begins with a single step,” or so goes the Zen adage. Sometimes the greatest journey of all can begin by doing the opposite—by refusing to take any more steps. After so many people telling us what we should do to make our lives better, the most dramatic act of self-improvement can be to stop “trying” to do anything. Once we realize, “It’s all a game,” man, we can relax and get a less uptight view on the whole case.

2. Believe there is a Dude Way to the universe.

Dudeism is a nontheistic religion, but that doesn’t mean we don’t believe there’s something tying “it all” together. At least on the humanistic level, the idea that there is a natural and harmonious way in which life unfolds is not only an important part of Taoism, but is increasingly being suggested by science—via disciplines like evolutionary psychology, complexity theory, chaos theory, and other far-out new shit that’s currently coming to light. Although academics may say everything is relative, and some mystics say that life is all an illusion, the idea that there is a “high road” is at the very least a useful idea that can help us feel at home in the world, or at least in our own little corner of it.

One of the reasons we can end up ushering un-Dudeness into our lives is because everything is so complicated. By consciously following the Dude Way and practicing Dudeist techniques, we can help simplify things and make sense of where we’re going.

4. Where’s the meaning, Lebowski? It’s down there somewhere, take another look.

By always being skeptical and always pursuing meaning rather than material, we will bring a limberness to our minds that can roll with any gutterball and deal with all the dings and dipshits that may come our way. It is only when we feel unattached[1] that we abide; without strings, the world can’t drag us along with it when it goes fucking crazy.

Again, by leaving the strands in our heads unknotted, we can easily let them go. If things don’t work out, then leave them alone. We can try to tie it up sometime down the trail when things get easier. No sense wasting energy now when you can do things more efficiently later.

6. Take long baths and meditate on your rug.

The ethos of modern civilization is “Just do it,” but the Dudeist’s is rather the opposite: “Just don’t do it,” or even better, “Just dude it.” To do nothing takes courage and discipline, but in the end, the struggle will be worth it, resulting in greater peace of mind and appreciation for the simple things in life. This will not happen overnight! A lifetime of business papers cannot be towed away in an instant. What are you not waiting for? Don’t do it now!

7. What in God’s holy name are they blathering about? That’s just like their opinions, man.

Lots of people will tell you that you’re crazy for following the Dude Way. Remember that you’re not the follower of a crazy cult—they are. Just because there are more people in their cult doesn’t mean theirs is better. Also, have compassion for them—they know not what they undude. Your easygoing lifestyle is a threat to their entire worldview. But down deep they’re just uptight bullies, going around blaming you for the fact that life isn’t fair. They have their story, you have yours.

8. Be Dude to everyone you meet.

There is no reason, there’s no FUCKING reason why you should ever be un-Dude to anyone. You’ll never derive any benefit from being a fucking asshole. Even when pederasts curse at you, or officers of the law make fun of you, maintain an easygoing attitude. People are afraid to be nice to strangers because they might look stupid. But stupidity is in the “I” (ego) of the beholder. Anyone who doesn’t appreciate your friendliness probably doesn’t deserve it in the first place.

In the immortal words of “righteous dude” Ferris Bueller, “Life moves pretty fast. If you don’t stop to look around once in a while, you could miss it.” The art of living is practiced on a day-to-day basis. Say what you will about the tenets of painting, dance, music, and filmmaking—there is no higher art than the one you doodle with your existencil. Be as proud of the canvas you paint every day as you would of one they’d hang in the Louvre.

The Dude minds his mind, man. That’s because we are not our minds. Minds can be real worthy fucking adversaries—always making us feel bad or confused or down in the dumps. And they can trick us into thinking everything has something to do with Vietnam. Adopting a cool, rational and detached attitude about everything can help us appreciate life instead of being frightened of it. Hey…nice marmot!

11. Adhere to a strict drug regimen to keep your mind limber.

While the Dude advocates external drug use both in action and words, he means them only as a vehicle to greater understanding, not escape from the world.

Though drugs have been demonized over the past few decades, we need to acknowledge that we are in fact on drugs all the time—our brains are constantly injecting serotonin, dopamine, adrenaline, opiates, and other natural forms of junk into our veins and our brains. To try to moderate this via meditation, conscious behavior, and sometimes even some well-chosen external chemicals, is akin to cooking—we just need to get the recipes right to avoid suffering (mental ) health problems.

Of course, drugs aren’t necessary to get high. We can get all fucked up on life just by learning to see our lives as an acid flash-forward. By developing the powers of our imagination through regular, determined daydreaming, reading, thinking, and other psychedelic pursuits, we can dramatically enrich the quality of our lives. Of course, like the real reactionaries and their pharma-illlogical lines in the sand, we too should differentiate these “good drugs” from the “bad drugs” upon which most of our population is heavily addicted: TV, consumerism, nonstop entertainment, violence, and status-seeking.

The cool thing about Dudeism in general—and The Big Lebowski in particular—is that it’s a great shibboleth. “Shibboleth” is a word from Biblical times that was hard for some people to pronounce and so was used as a sort of test to see if they were actually members of your “league” or not.

In helping to spread the Dude word, you’re bound to find other like-minded compeers, you know? The world can be a dark place if you don’t have others around who dig your style. What’s more, you might even help “save” borderline assholes, fascists, dipshits, real reactionaries, and human paraquat who might be looking for an excuse to stand up (or lie down) and join the Dude movement. Cast a chill upon the world, dude. And make it feel all warm inside as a result. Halle-Dude-Yeah ! Fuckin’ A, man.

Duderinos Unanimous is taken from our book The Abide Guide. More info here.

_________
NOTE:
[1] In the Buddhist sense of the word. Though almost everyone has “strings” (responsibilities to family, friends, jobs, etc.) Buddhism says we shouldn’t be “attached” to the outcomes or expectations of those relationships.