To ask a general philosophical question please use the form at the bottom.
Please Contact us directly for specific questions about your ordination, etc. 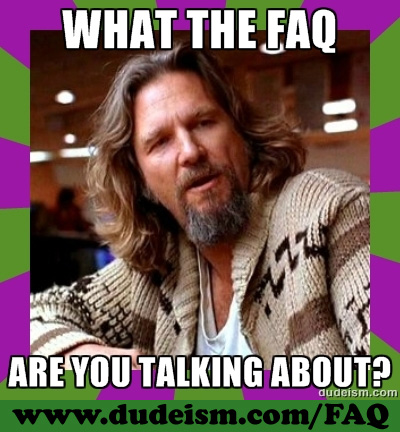 Q: Is Dudeism a real religion?

A: Although Dudeism makes use of a lot of humor and satire, we are totally serious in our belief that it is “the religion for its time and place.” Or, we’re as serious as anyone can be about a “belief.” One of the core tenets of Dudeism is that everything is “just, like, your opinion, man” and so everything has to be up for debate. Unlike other religions, we’re open to suggestions. In this way, Dudeism could be considered an “open source religion.” We invite other people to tell us what they think is “dude” or “undude.”

Q: Are ordained Dudeist priests legally allowed to preside over weddings and other ceremonies?

A: In the United States, yes. The US was founded with the idea that religion and government should be strictly separated and that government should make no law infringing on religious freedoms. Therefore it’s generally not up to the government to say what is or is not a religion and if that religion can decide who is ordained as a minister in that religion. As such, most states allow ordained Dudeist priests the authority to preside over wedding ceremonies. Some states are sticklers though, and we recommend that everyone check with their county clerk first before officiating. We’re not sure about other countries – let us know!

Q: Is there a God in Dudeism?

A: Like Buddhism, Taoism and Confucianism, Dudeism is a non-theistic religion. That isn’t to say Dudeists necessarily don’t believe in God or a godlike power in the universe, only that passing judgment on this issue is not one of Dudeism’s goals. Like the Eastern religions just mentioned, Dudeism is interested in the here and now, not the there and then. The Dudeist objective is to make our lives more pleasant and meaningful to ourselves and each other.

Q: In The Big Lebowski, The Dude is called “The laziest man in Los Angeles county.” Does Dudeism advocate laziness?

A: Not necessarily. Dudeism counts among its ranks the unemployed, people of leisure, urban achievers and millionaires and everything in between. The point is not that the Dude is lazy but that he is true to himself. He is immune to the pressures of society and status anxiety which would otherwise make him feel bad about not having accomplished much in his life. Dudeism is a defense against the opinions of others, so that if you feel like living in an uncommon fashion, or if you don’t feel any desire to make a lot of money, you shouldn’t feel guilty or embarrassed. If you enjoy your work, then by all means, work hard if you like. Remember that the Dude may have been unemployed, but he was devoted to the art and practice of bowling.

Q: Do you really have 250,000 Ordained Dudeist priests all over the world?

A: More than that now. And while most of them probably signed up because it’s easy and fun to do, a significant number are committed to the organization. Every day we get emails that say things like “Dudeism changed my life.” We have many regular contributors to our site and plans to develop a social network (Dudeism.net) which will help people set up congregations in the “real world.”

Q: Why do you think Dudeism has become so popular?

A: Because people instinctively feel the need for religion. Yet the only religions around are about 2000 years old or more and so can’t possibly provide the worldview for a world that’s changed so much. Traditional religions have tried to adapt but can’t; the Atheist movement has gathered steam but hasn’t provided anything to fill the gap where religion used to be. Finally, some who self-apply the handle “New Age” have tried to replace old religions with even older supernatural ideas. Dudeism, on the other hand, takes the essential messages of all the world religions and simplifies them, purging them of all their dogma and superstitions, leaving only the easygoing, useful and fortifying parts. Moreover, one can be a Dudeist and still remain a Christian, or a Buddhist, or a Hindu, etc. Dudeism isn’t a strict system – it’s more of a method of living, a state of mind. In order to keep your mind limber, Dudeism needs to remain limber as well.

Q: Is Dudeism meant to be a parody of religion?

A: The original intent was not to mock religion, but to provide a religion for people who like some of the aspects of religion but didn’t really like any of the stuff that was available.

It was also designed to be a group exercise in trying to figure out what the pragmatic and rational aspects of religion were. The fact that we parody a lot of established religions isn’t so much to make fun of them but to draw light to how arbitrary and illogical many dogmas are. Perhaps we are “pulling the rug” out from under the sacred cows from time to time, but not before snagging some of their milk for our beverages. Anyway, no harm intended. Mostly, we’re sympathizing here. Religion is a complicated case. Lotta ins and outs and what-have-yous.

It’s all very tongue in cheek. But that doesn’t mean it’s not true. Isn’t humor and silliness and lateral thinking the best way to find out what’s true? And isn’t furious linear idealism the worst way? It’s arguable, given the attitudes of some of the worlds greatest thinkers (and the worlds biggest douchebags) that the more serious someone is the less he or she understands. We all can get very high and mighty about “the truth” and so we should appreciate when people take us down a peg.

When compared with the most popular parody religion, The Pastafarians, one can see that Dudeism is substantially different. They are totally “meta” in that they are mocking the institution from within that institution. And we do that as well, from time to time, but we’re also, let’s say “para” in that we are also husbanding (to use Ames and Hall’s term, from the Dao De Jing) the aspects of the religious impulse that are of value. Like a paralegal or a paramedic (or for the drummers, a paradiddle).

As you can gather, there are many ways to look at it. Even its founders find it hard to pin down what Dudeism is exactly. Maybe that’s a good sign.

Q: Can women be Dudeists?

A: Of course. We feel that “dude” is a gender-neutral word (see “What is Dudeism“?). Just as it’s no longer acceptable to call female actors “actresses,” we don’t recognize the epithet “dudette.” Dude is a philosophy and has nothing to do with maleness or femaleness.

A: We’re about to launch Abide University, our online center for higher learning. We may be offering Ph.Ds but it will probably stand for “Dude of Philosophy,” not “doctor.”

Q. Marijuana and alcohol are mentioned a lot in Dudeist circles and essays. Is that an important part of Dudeism?

A: Absolutely not! What’s important is finding ways to help you relax. For some (like the Dude himself) people weed or White Russians do the trick. For others it’s bird-watching or even running marathons. We hope that non-smokers and non-drinkers are not put off by all the references to those things. Dudeism is all about general attitudes, not about specific interests.

Q: What do the Coen Brothers and Jeff Bridges think about Dudeism?

A: We’re not really sure. We’d love to meet them and discuss it, but they are busy, as I know you are. What we do know is this: when asked what they think of Dudeism in an interview, the Coens replied “Nobody’s more surprised than we are.” And Jeff Bridges said he’s “flabbergasted” by it.

Q: Can I call myself a “spiritual counselor” after being ordained?

A: At least in the USA, it can be illegal to use the words “counselor” or “counseling” in your business title if you’re not officially licensed by the state. You would need to look into this. However, calling yourself a “guide” or “advisor” should be fine.

A: There is no log in feature. If you want to check out your ordination information, it will be in the email we sent you. If you can’t find the email, please contact us. Our sister site, Abide University (www.aui.me) does have a log in feature so that you can manage your degrees.

Q: Can I use my ordination to get out of having my hair cut or getting vaccinated or something else?

A: Since there are no rules in Dudeism other than “don’t be a dick,” we can’t advocate on the behalf of people who want to get around rules like that.

Q: When does my ordination expire?

A: Never. If you want to rescind your ordination, please contact us and we’ll remove you from the database.

Q: I changed my name. How do I change the name on my ordination?

A: Contact us and we’ll do it for you.

Q: Can I use my ordination to avoid paying taxes?

A: Sorry. If you want to avoid paying taxes you will have to set up your own church via a 501c3 organization in the United States. Outside of the United States very few similar options exist.

Q: Why do you talk about The Big Lebowski so much? Aren’t there other vehicles for Dudeism?

A: There are many, but none so far that exemplify the philosophy so lovingly and with joy. However we do discuss a lot of other influences at The Dudespaper, in our book The Abide Guide, and at the Forum. Some day we hope to pull away from obsessing over this one film, but for the moment it’s still fun.

Q: How can I learn more about Dudeism?

A: Aside from stuff in our library, there are some good articles all over the web. Here is our Wikipedia entry. Here are some good interviews with Rev. Oliver Benjamin, the current Dudely Lama and founder of Dudeism: CNN, IBN, We Love Cult, Don’t Panic, Otis Ryan.

Q: How can I participate in Dudeism?

A: Mainly by telling people about us. We’re also always looking for submissions to The Dudespaper. And our forum is a fun place to hang out. But once our social notwork (Dudeism.net) is up it’ll be easier for Dudeist priests to meet up with each other in real life, plan events, volunteer, go bowling, engage in flashmobs and random acts of dudeness, stage Abide-ins and more. New shit will soon come to light, man!

If you like being an ordained Dudeist Priest, why not mention it in your email signature or on your blog?

The FAQ question form is now closed. Too many people have been using it to ask specific questions about your ordination, store orders, etc. We give up! Please contact us directly with your questions.
----
~ Enjoy our fun stuff ~