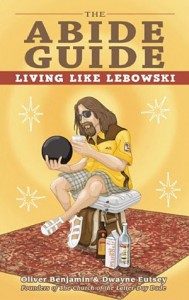 From The Abide Guide

The Power of Dudeiversal Energy

Rev. Andrea Favro, the Dudeship of Italy, is a longtime contributor to the Dudespaper, and he’s helped introduce many spiritual ideas to our rug-based religion. He maintains and edits dudeismo.org, the popular Italian portal for Dudeism, from his pad in Northern Italy. His catchphrase is Abideamo!

Learn the ancient art of Thankie and you’ll be thankful. And who knows, you might even be able one day to call the Stranger compeer and to become one of the Immortal Dudes who wander around the earth helping other Dudes to deal with the durned human comedy.

Before telling you about this ancient Eastern art, I need to talk a little about yin, yang, and chi. I know these are touched on in other parts of this book so I hope it won’t be exhausting, but we need the right frame of reference here. According to our Taoist compeers, everything that exists is subject to the interaction of two opposing forces: the yin and the yang. Their movement or alternation creates chi or ki, the living energy that permeates everything that exists in infinite ways and at infinite degrees. Yeah, it’s pretty far-out, if we understand it correctly.

As you know, everything yin has a part of yang, and everything yang has a part of yin. Just like Walter has a bit of Dudeness in his heart and the Dude also displays a bit of the Walterish from time to time. Yin and yang actually are not opposing forces, rather they border, define, and meld into each other in the same way that ups and downs, strikes and gutters, Dude and un-Dude, Pacific ocean and beach community, and half-and-half could not exist without each other. They transform themselves continuously into their opposite, and in this way create chi. This continuous transformation is needed for the health of living systems—if something is totally yin, you end up with immobility. And if something is completely yang, you have burnout, or explosion, or nihilists torching your fucking car.

Now the concept of chi, or the “universal living energy”—that’s something that really made a lot of sense to our Chinese compeers. But it’s not just some kind of Chinese thing—it was also known as pneuma in ancient Greece and Rome, as prana in India, and as ki in Japan. Many arts have been developed to access this universal infinite energy, or force, to use it to heal and to deal better with life itself. Techniques like chi gong, tai chi, aiki, and pranayama are all well known these days. However, it seems that the energy technique that seems to pull the most water in the West lately is called Reiki (pronounced rayee-key).

Let me tell you a couple of things about Reiki: Much like other arts, it began as a very simple technique to heal oneself and others. Today it’s become a much more business-oriented thing. Mr. Usui, the Japanese founder, practiced it for free or for a small fee. Today you usually have to pay thousands of dollars for a two-day class to get a piece of paper stating that you are a Master of Reiki. Someone’s trying to scam everyone here, man. The goal of Reiki as Usui intended it was to be the simplest possible way to reconnect with nature and to access the universal life energy to increase health and live better. Usui would never have dreamed of taking your bullshit money.

Reiki (the original, uncompromised first draft) was a method to teach you to be your own healer. Think of the Stranger: He doesn’t show the Dude how cool he is or how to be cool; he just asks the right questions, listens to the answers, and gives the right and needed inputthere to help the Dude pull himself out of the dumps. Some people think the Stranger is just a part of the Dude’s imagination. Far out. But that’s a good way to express how our Dudeist version of Reiki—called Thankie—works. Basically, we can be our own “smarter feller than ourselves.”

There are many techniques to increase or use chi in our daily life, but most of them are either difficult to learn or just too complicated for a common Dude who just wants to feel better without having to train for hours every day. Thankie uses two simple things: your breath and a bit of imagination. Actually, imagination is needed during the first part of your practice; it will be replaced afterward by knowledge and feeling, but at the beginning, imagining is enough.

While at the beginning we’ll need to practice it and to imagine a little of what’s going on inside and around us, devoting time to practicing Thankie will become second nature, just like learning to use a bike or a car. Make it to practice, dudes, and you’ll make it to the finals every day without feeling like the good universe gypped you.

Okay then, let’s dig the style of Thankie:

1. Belly Handles
To employ the full power of Thankie we must relearn to breathe naturally. It’s actually easier than it seems. Breathing naturally using our belly is an ability we all possess, but something most of us have forgotten in this age of uptight thinking.

Instructions: Lie down on your sofa; put one hand on your chest and the other on your belly, and look at how they move when you breathe. If you are like most human beings, the only hand that moves is the one on your chest, or that’s the one that moves first. Natural breathing, or belly breathing, instead requires you to breathe using your belly so that when you breathe in, your belly extends, and when you breathe out, your belly contracts. This will also help you to strengthen your belly muscles and maybe reduce your beer belly. If you do it correctly, the hand on your belly will move first now. To get a couple of examples, look at how your baby, or cat, or dog breathes and do the same. As a matter of fact, when we are infants we all breathe this way.

2. Go With the Yin and Yang Flow
When we breathe in, we visualize yin energy coming in from the sky through the top of our heads down through our whole body passing through our undies chakra.52 This is two or three inches down from your belly button, usually where the elastic waistband on your underwear sits. From there, imagine it passing through your feet and on into the earth. When we breathe out, imagine yang energy going in the opposite direction: from the earth, through us and up to the sky. “From my toes up to my ears,” as Bob Dylan sings in “The Man in Me.” Dylan, of course, is a Thankie master.
(According to Indian Ayurvedic medicine, chakras are energy centers in our bodies. The Chinese and the Indians disagree on how many there are and where they are located, but they all agree on the existence and relative importance of the undies chakra, although they don’t call it that. If you’re not into that whole brevity thing, you can also refer to the head as the “strands in Duder’s head chakra” and the feet the “fucking toes chakra.”)

3. Making It to Practice
Every morning, lie down on your sofa and practice for 20 breaths in the manner described above. Pause for a second or two between each breath. And always use your belly as the engine of your respiration, not your chest. If you like, you can then repeat the twenty breaths at midday and in the evening to get faster results. Soon, breathing this way will become automatic.

The Lake of Dudeness
The undies chakra is a very powerful energy center. As you practice Thankie, you’ll become aware of your undies chakra to the point where you will actually be able to “see” it. When you are feeling unwell, imagine waves of harmony starting from your undies chakra and spreading calm and coolness everywhere, like waves spreading around a cell phone thrown into a lake.

Shoosh!
At times it can happen that one’s mind isn’t as limber as it should be. Too many strands in ol’ Duder’s head. In that case, the Chinese would say there’s not too many strands, but too much heat in ol’ Duder’s head. These are times when imagining the flow of cool yin going down to the earth can become useful to empty our mind and make it limber once again. The opposite is also true: When our minds are too limber, imagining the upward flow of hot yang can help us think in a more focused way. If you are into that whole mantra thing, it can be pretty useful to think the word “shoosh” to symbolize the flow of yin or yang moving down or up. “Shoosh” and your mind gets limber. “Shoosh” and it snaps to attention. Shoosh. You won’t lose your train of thought or ramble so much again.

Practicing Thankie on Others
While a big part of Reiki is about “laying hands” on (or near, actually) other people to heal their sicknesses, many learned men (even graduates of two-day Master of Reiki courses) have disputed this. When it comes to the transfer of chi from one person to another, well, dude, we just don’t know. But it couldn’t hurt, and concentrating on the concerns of folks in need can be profoundly pleasant for all interested parties. We invite you to sign up and send free Dudeiversal energy to anyone who needs it via our site: dudeism.com/thankie. Just don’t try and scam anyone here, man.

Even if you don’t want to practice Thankie on others, just practicing it on yourself can help make the world a better place. When you use Thankie to calm yourself down and strengthen your own spirits, you’ll be able to spread waves of relaxation, coolness, and calm all around, wherever you go. You can influence others’ lives just by being Dudely—abiding by example. And that’s cool, that’s cool.

That’s it! Now you are a Thankie Master and no longer a Stranger to the Dudeiversal energy of the Universe. Shoosh.

[From our book The Abide Guide]