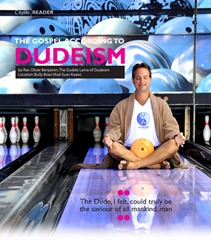 As some of you may know, the current Dudely Lama of Dudeism lives most of the year in Chiang Mai, Thailand. He’s just started penning a regular column in a popular English language magazine in that exotic and suitably Dudeish city at the far foothills of the himalayas (the tip of its green toenail, actually).

Here’s the first installment of “The Dawn of the Dude”, concerning holidays in general and The Day of the Dude in particular.

You can also read an article Rev. Lama wrote about Dudeism back in the December issue of the same magazine.

Regarding Chiang Mai, we highly recommend coming out to visit or even to live. Check out the rest of Citylife and some of the back issues to get a feel for what’s going on in this very laid back, cheap and easygoing town. Generally you don’t have to pay the rent until the 10th or even later.