Can you please explain how Dudeism works and it’s relation with Taoism?

In many ways, Dudeism is like a modernized and simplified version of Taoism. Taoism is probably the most mellow, down-to-earth and philosophically timeless religion that still exists today. There are versions of it that are just as superstitious and hardened as other religions, but the essence is still recognized, at least by scholars.

However, there’s another way to look at it: We believe that Dudeism exists in all religions, as the more gentle, relaxed, easygoing aspects or sects or offshoots of those religions. Whereas Taoism was the Dudeist aspect of Traditional Chinese religion (Confucianism being the more unDude side), this can also apply to other religions: In Christianity (Gnosticism vs. Literalism), Buddhism (Zen vs the more superstitious, animistic and hierarchical forms), and Hinduism (Yogism vs Brahminism). Even Islam has the very groovy Sufi tradition started by the very Dudeist poet, Rumi. But Dudeism is always the less popular path, with less power and requiring more personal responsibility than the mainstream. You can even see that New Age traditions are starting to get dogmatic and power-hungry. It’s not easy taking it easy. There is always a lot of pressure to be serious about things and to protect one’s ideological territory. Dudeism is the corrective to that.

How do you create a whole religion based on a movie character? how was the process between watching the movie and creating dudeism?

One could argue that all religions are based on characters – even if those characters were real you can see how much people disagree about what they said or what they meant. As Joseph Campbell pointed out, the power of myth is that it somehow transcends reality. A fictitious character can do that better than a real person. The Dude is a character similar to all the great sages in history, only he’s a more contemporary version, and so more easily identified with. It’s surely no accident that in his robe and sandals and long hair and beard he looks a lot like Lao Tzu or Socrates or any other of the great Dudeist sages in history.

Did you watch the movie in theatres when it premiered? what was your first impression when u first watched it? Favorite quotes, characters, scenes, etc.

Like most people I saw it on video – it was only in theaters for two weeks. I love the Coen Brothers so I enjoyed it a lot when I first saw it in 2000, but it wasn’t until seeing it again in 2005 that I began to realize just how deep and profound it is. I’m still discovering layers and motifs and lessons every time I watch it or discuss it with fellow Dudeists and Lebowski fans. As the Stranger says in the movie, “There was no bottom…”

People ask me all the time what my favorite lines or characters are in the movie and I now always reply that it’s like asking a Christian what their favorite scenes or lines or characters are in the Bible. The whole thing is like a diamond – each part reflects the other. All of it is exquisite. I can’t find a single thing I’d change in it. Having said that, the opening scene where Dude, Donny and Walter are arguing never fails to bring me to tears of laughter. Even after seeing it 50 times.

Has the reaction to Dudeism been what you hoped for? Did u had any expectations about it?

I started Dudeism because I couldn’t find a religious or spiritual tradition that appealed to me. I’ve traveled the world and studied many of them and they all seemed to take things a bit too seriously. I was hoping I wasn’t the only one who felt this way and one of the greatest rewards I’ve received is to find out so many other people feel the same way as I do. Dudeism has helped me “feel at home” in the world. Along with many others. We’ve got a long way to go and are still working out what the details of the philosophy are, but then maybe that’s the point – it should never be all figured out. The universe doesn’t present itself as a problem to be solved but a project to be enjoyed and unraveled and woven together again. Like the Dude’s rug.

How many times have you watched the movie? Does it work like a “visual bible”?

The concept of a “Bible” doesn’t work with Dudeism in the same way that it doesn’t really work in Zen. There is no “Bible” in Zen because no matter how much you say, your words will always be “fingers pointing at the moon”, not the moon itself. We already have a few books (The Dude De Ching, The Abide Guide, Lebowski 101) and we will probably have many many more in the canon of Dudeism. Remember the Arab proverb: Beware of a man of one book. Monomania is not a hallmark of Dudeism. We’re always striving to keep our minds limber. Maybe we’ll get so limber that we won’t even deal with The Big Lebowski any more and move on to another movie.

Can you give Five Tips to be more “Dudeist”? 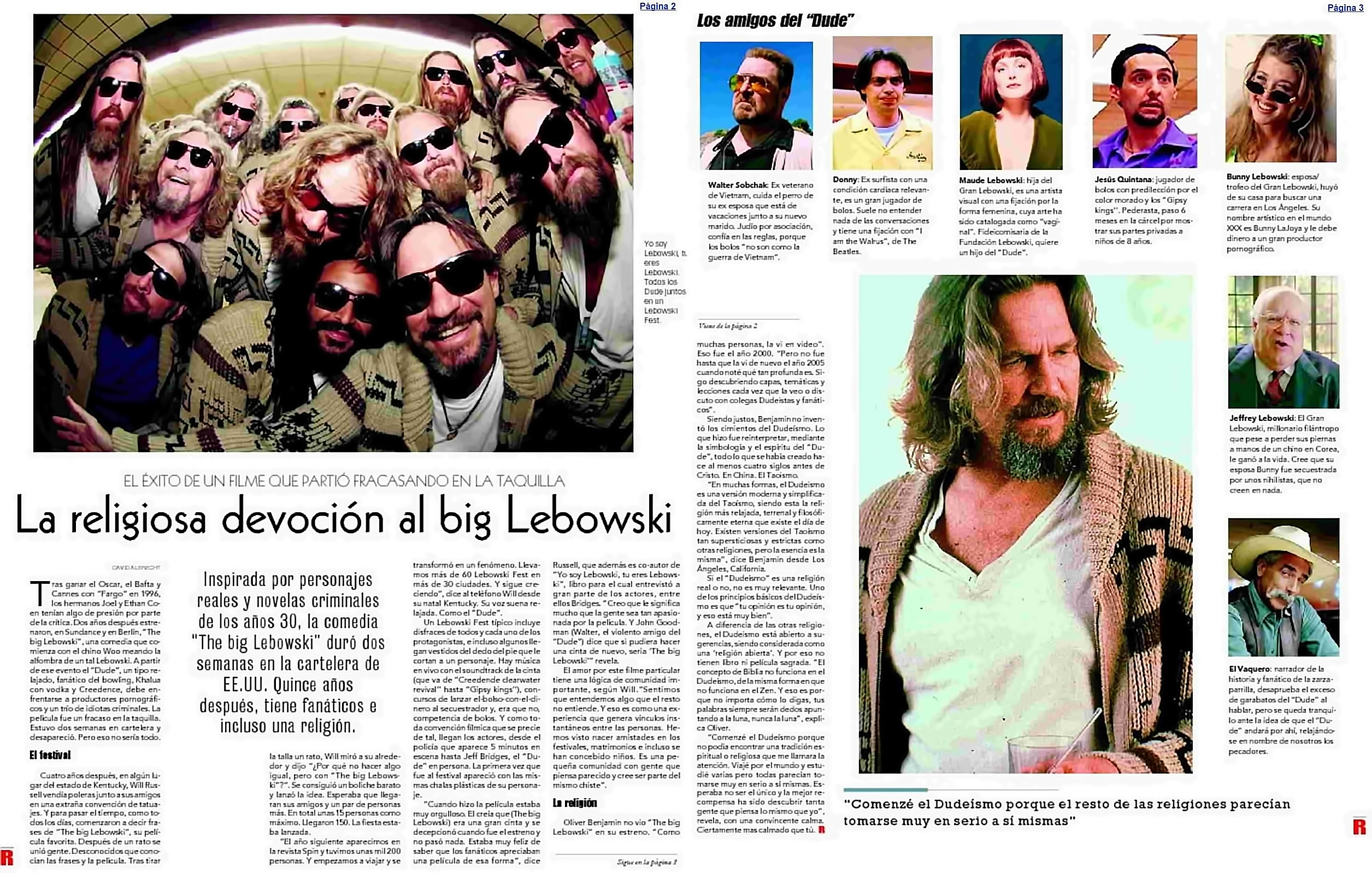